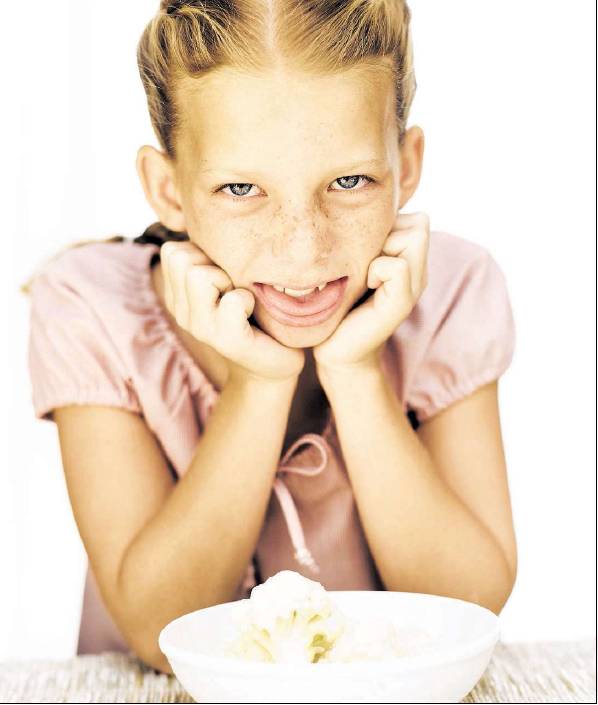 Q. Our seven-year-old daughter’s eating habits are causing concern. She is our youngest by six years and, unlike her older siblings, has developed a very limited repertoire of acceptable foods to eat. She resolutely refuses to venture beyond plain pasta and pizza, noodles, chips, cheddar, chocolate ice cream, bread without crusts and smoked salmon. She has never eaten meat or vegetables, and fruit has been limited to a handful of grapes and a couple of apples to date. The consumption of said fruit was an undertaking of marathon proportions. She is also partial to treats such as chocolate and crisps. While it would appear that she is getting adequate nutrition as she is perfectly healthy, taller than average and of normal weight, it is causing us much anxiety over how to approach this issue. We have tried not making a big deal of it, using encouragement, bribery and coercion, but all to no avail. Will she just grow out of it as many parents tell us? Is this just a power play? Earlier this year, she finally gave up on her soother and bottle. This was achieved with much coaxing, but mainly because of her own realisation that this was no longer the norm among her peers. She is a happy, contented and popular child, who is always on the go and has given us no other cause for concern and indeed is a constant joy.

A. Picky or fussy eating is very common in childhood. In some surveys, up to two-thirds of parents report having problems getting their children to eat healthy foods. The prevalence of the problem does not make it any easier to deal with and most parents become stressed when food is refused, worrying that their child is not getting enough nutrition. This can lead to mealtimes becoming battles over food, which are counterproductive and can cause further resistance to healthy eating and put a strain on the parent-child relationship.

When dealing with eating conflicts, it is a important to take a step back and put things in perspective. While many children are fussy eaters, in most cases this tends to lessen as they grow older and even though these children have quite restricted diets, the vast majority are growing/ developing normally.

Compared with some fussy eaters, your daughter’s diet includes some healthy foods and you have made some progress (albeit slow) with her eating some fruits. In addition, as your daughter is doing well and growing normally, this is another reason to be reassured. Some parents further reassure themselves by including a vitamin supplement or health drink in their child’s diet.

It is important, however, to continue to encourage your daughter to eat healthy foods, though the aim is to do this in a positive way and to reduce the “battles” about food. It is helpful as a parent to remember that all you can do is set the agenda for healthy eating and to surround your child with healthy food – you can’t actually make your daughter eat them. As nutritionist Ellyn Satter puts it: “Parents are responsible for the what, when and where of feeding; children are responsible for the how much and whether of eating.”

In practical terms, this means that you make sure mealtimes are relaxed, with the family eating together, where your daughter has the choice of healthy foods, but you accept that she makes the ultimate decision about what and how much they eat.

It also helps to take time to understand your daughter’s individual preferences and needs. Some children prefer only certain tastes, smells and food textures, and it can help to adapt to this and offer them healthy foods that match these sensory preferences. For example, some children may avoid vegetables because of their textures and you might make more progress presenting them as a soup or puree or even raw if they prefer a “crunchy” texture. Other children prefer sweeter rather strongly flavoured foods, so are more likely to try the sweeter vegetables such as carrots and sweet potatoes.

Fostering healthy eating habits is a long-term process and takes a lot of patience. Research shows that children have to be exposed up to 20 times to a particular food before they might eat it. They might first smell it, take a small part in and out of their mouth before they even take a small bite. It is crucial to be patient and positive and praise little small steps – “Good to see you tried a bit of the apple” etc.

Give your daughter very small portions of new foods, perhaps alongside familiar foods and only aim for her first to tolerate the food on her plate, before maybe taking a bite the next time. Children are also strongly influenced by role modelling – if they see you and the family sitting down and enjoying foods (once the emotional pressure is removed), this can inspire them to give it a go.

As you have discovered with your daughter giving up the soother, peer pressure can be more influential as children grow older. You could use this to your advantage by letting your daughter eat with other kids who eat a healthy range of foods, either by inviting them to your house for dinner or letting her visit other families for a meal. Some children only begin to expand their range of foods when they start socialising or going on activities such as scout trips when they are older.

There are lots of other things that can help such as making some of the snacks she eats dependent on her trying some healthy foods first, but make sure to start gradually (for example, she gets the dessert if she eats one pea) and then build up slowly. Other creative ideas include reading a good child-centred book on health and nutrition with your daughter or enrolling in a children’s cooking class together or letting her plan some family meals but showing how she must include the major food groups (carbohydrate, vegetable, etc).

It is likely that her fussy eating will change over time, but if you remain concerned, you could consult with a dietitian who will be able to advise further and even suggest particular recipes and meal plans that may work with your daughter.