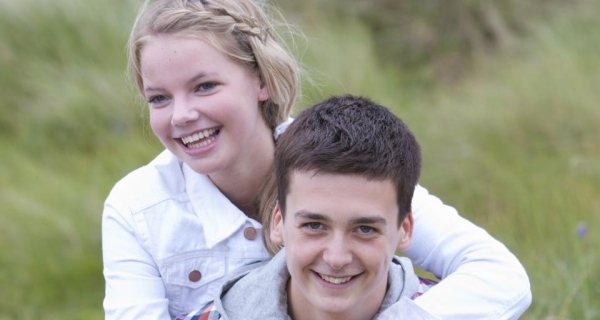 Q. My 16-year-old son has his first serious girlfriend who is the same age. They seem to be “madly in love” and want to spend every waking hour with each other. This is fine, to a degree, and I remember being in love as a teenager myself, but I am worried that it is all a bit too serious. I am particularly worried that they might have sex and I find myself supervising or chaperoning them when they are in the house to the point that it must be annoying.

I have had the conversation with him about him being too young to have sex and he has been told about birth control and safe sex. Each time we have a conversation like this he gets embarrassed and fobs me off. My husband thinks I am over reacting, that he is a sensible kid and I should back off a bit. They will both be 17 at the end of the year but even so I am not sure about them having sex at that age. My main worry is that she will become pregnant. Any advice is welcome .

A. The prospect of their teenagers becoming sexually active is generally an uncomfortable subject for most parents. Many parents have strong beliefs and values as to when their teenagers are ready to have sex and even parents with more liberal views who accept their teenagers having sex may find it hard to accept that this might be happening under their own roof.

As you have discovered, it can also be an embarrassing subject to raise directly with your teenager and, as a result, it is easily avoided or discussed only indirectly or with vague warnings about consequences and dangers. However, I would suggest that it is important for you and your husband to confront the issue head on and to find ways to discuss the issues frankly with your son. Below are some guidelines.

Think through your own values
The first thing to do is to think through your own values and what is at issue for you. It is perfectly reasonable for you not to want your son to start a sexual relationship until he at least reaches the age of consent, especially given the legal implications of this. You are also entitled to share your values with him about sex and relationships and to state a preference that he might wait until he is older or is more secure in the relationship or until he has completed his Leaving Cert, or whatever else is important to you.

It is also reasonable that there should be some element of chaperoning and supervision when he is with his girlfriend now and even beyond the age of 17. You should also take into account what his girlfriend’s parents might feel about the situation. They may also not like the idea of their daughter being unsupervised or involved in a sexual relationship at a young age.

Be realistic
However, you also need to be realistic and accept that your son and his girlfriend may choose to have sex despite how you feel about this. Even if you could supervise and chaperone your son all the time, this may not be desirable as it does not teach your son about being responsible and making his own decisions. Also, if you are too “controlling”, this could backfire and it could push him to defy you or to hide things from you and to not tell you when he is seeing his girlfriend.

For this reason, as well as stating your values, it is important to make sure that your son understands contraception and is prepared to use it. It is important to warn him about the power of sexual attraction and how many young people can have sex in an unplanned way in the heat of the moment and this is when they are most at risk of pregnancy, and so on. You need to make sure he understands that it’s up to both partners to think about using condoms and contraception.

Having the conversation
Though it can be an awkward conversation, it is important to confront these issues head on and to raise the concerns in a matter-of-fact way. Picking a good time to talk is a crucial first step, for example when you have time alone together such as on a walk or in the car.

It can be a good idea to start gently and positively by making positive comments such as “Things seem to be going well with N” or “N seems like a lovely girl” or by asking open questions “How are things going with N?” Encourage him to talk about the relationship and listen carefully to his feelings. Accepting his relationship and what it means to him is important and will reduce his defensiveness.

In raising the issue of sex, a good strategy is to be matter of fact and to ask him what he thinks as well as stating your own views. For example, you could say “As your parent, you should know I think you should wait until you are older before you have sex . . . What do you think?”

If he is embarrassed or finds it hard to answer, acknowledge this is a difficult conversation but that as a parent you need to talk to him to ensure he knows the facts and is well prepared. It could be helpful if both you and your husband have these conversations with him at different times so he gets access to both the male and female viewpoint as well as the support of his mother and father.

Trust your son
Bringing up teenagers is a delicate balance of setting rules and guiding them as well as backing off and trusting them to make their own decisions. Expressing a belief in your son that he can make good decisions – “I know you are sensible” – can help him believe in himself. Above all, keep the channels of communication open between you so you can be there to support him along the way. There are some great resources and downloadable booklets on talking to teenagers about sex and sexuality on www.crisispregnancy.ie