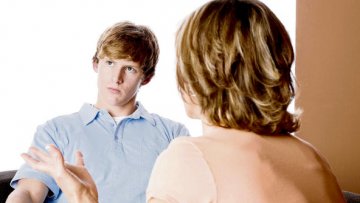 Q: To what extent can hormone changes affect a teenager’s behaviour and mood? I have a 15-year-old son who, all in all, is very good in terms of his behaviour. However, he is almost six feet tall and his voice has broken, so when he is in a bad mood, his presence and mood are felt by the whole family. We apply previous advice from your column about speaking respectfully and so on, but when he is angry or annoyed over something that he is not allowed to do, he raises his voice and ends up shouting.

Every time he shouts, we ask him to lower his voice and speak respectfully if the conversation is to continue. But his reactions have a negative effect on the atmosphere in the house and on other family members. We have discussed this with him, so he is aware of how he is affecting others, but on the days he is in a bad mood, he forgets all this.

This can be quite disheartening for us as parents – sometimes I don’t recognise my son in the grumpy/moody young man in front of me. If he so wanted, he could make life very difficult for us at home – fortunately he doesn’t go that far but, to be honest, given his size I feel that there is nothing stopping him from ultimately doing what he wants. I know that we can hold back on money and other things he may want, but when he is in a mood, those things don’t seem to matter too much to him.

I think as a parent, I would feel more reassured if I had some idea to what extent the moods are just part of being a teenager and will pass. There are days when my son is a pleasure to live with, and those days are great and he is more content himself on those days also. A small child may have a tantrum and a parent can deal with it, but a six-foot teenager with a man’s voice having a tantrum is a much more difficult situation to manage while trying to maintain some element of harmony in the family home. What are your views on and experience of this with teenage boys?

A: What you describe is a very common experience for parents of teenagers. Teenagers can become very challenging and disrespectful, and their physical size can make these rows much more intimidating than when they were younger. You ask about whether hormones are a significant factor in these changes and the short answer is yes, definitely!

One of the reasons for a deterioration in many children’s behaviours when they become teenagers is the physical and developmental changes they go through. With a physical growth spurt, their bodies experience tremendous changes. They can experience much stronger and more intense emotions, can be more critical and challenging intellectually and can feel more pressure within peer groups and school.

In addition, these changes all come at a time when developmentally they are pushing for independence from the family, and a normal part of this is being critical and negative towards their parents while valuing peers and role models outside the family. All this is a recipe for much conflict.

The good news is that this phase does tend to pass. Most of the families I work with describe having a “bad year” with one of their teenagers before things begin to improve or settle. As a result, hanging in there and putting things in perspective is important.

In terms of managing the situation, the best approach is a balance between being sympathetic and understanding of what your son is going through, while also challenging and standing up to his disrespectful behaviour. With teenagers, often the problem is not with what they are saying but with how they are saying it. It is perfectly legitimate for them to question rules and to ask for more independence, though it is not okay for them to intimidate people or make the family suffer their bad mood.

Discipline does have a part to play also. It is important that you have a good plan of action as to how you will respond when he reacts angrily. Usually, the best advice is to first request that he speak respectfully, but if he fails to do so, to calmly interrupt the discussion until he calms down.

Your own emotional response is key at these times. If you let his anger intimidate you or you get angry in return, this can make matters worse. This is hard to do and is the reason I suggest to parents to use consequences rather than criticising or haranguing their teen to behave. Examples of effective consequences are a loss of pocket money, reduced TV time or, most effectively, a delay of his original request (for example, “Because you shouted, you will now have to wait a half hour before I drive you to your friend’s”).

You are correct that a warning of consequences may not work immediately, but the key is following up with them. A follow-up conversation with your son when he is calmer is probably the most important aspect of this process. During this conversation, you need to share with him the impact of his moods on everyone and to remind him that his privileges in the house are dependent on him behaving respectfully.

It is also important to be positive with him (for example, “Come on, you normally behave so well”), as well as to get his take on what happened and to talk through strategies to manage his anger, such as pausing and taking a deep breath. Even if he forgets all of this in the moment, it is important to persist with these conversations and to keep putting it back to him to think of solutions – “What can you do to make sure you don’t get into these arguments?”

Ultimately, the goal is to help him learn how to manage his anger and moods and over time to show him how to communicate more effectively.