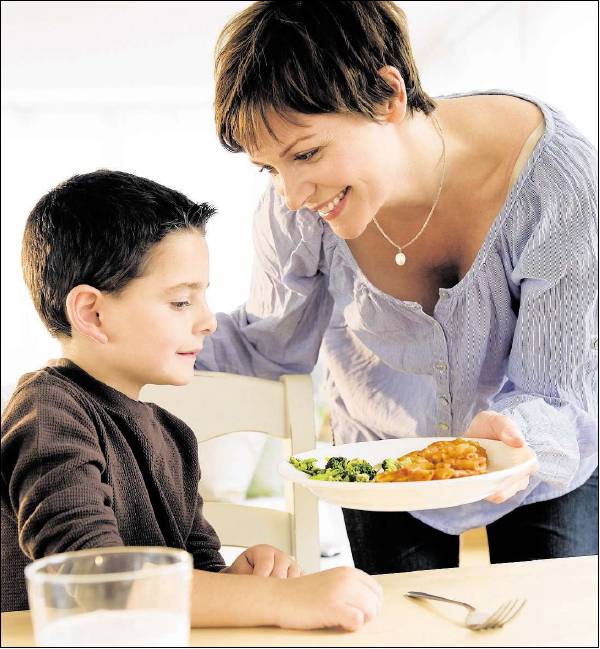 Q. Over the past year or so, our eldest son, who is just nine, has become rather rotund. His shoulders are broad and his arms and legs are solid but, even so, his tummy is pretty noticeable. He is 130cm tall and weighs 32 kilos. On an average day, he has two Weetabix with cornflakes for breakfast. Lunch at school is a wrap with ham or chicken, and a piece of fruit. Dinner-wise, he is not wild about vegetables so they are hidden in Bolognese, or in the sauce for meatballs, but if pressed he will have carrots or peas with a chop or a piece of chicken or salmon. He hates yogurt and creamy sauces. He really loves his food and he will swoop on, for example, roast chicken skin (which we resist giving him). He doesn’t have many snacks, but if he is peckish in the evening we give him a banana and no more than one piece of wholemeal or granary toast. He drinks only water and milk and has one treat a day, usually a mini-Crunchie or some Maltesers.

He cycles or scoots 2km to and from school most days, plays hockey, soccer and cricket depending on the season, likes to play on the road with friends, and loves the trampoline. TV and Wii are limited to half an hour a day during school time. We feel we are doing what we can to tackle the problem and so would really appreciate your advice.

A. A child becoming overweight is a delicate problem and one that needs sensitive handling. Given the health problems associated with adult obesity and the fact that eating and weight patterns are set down in childhood, you are right to be concerned and to want to take early action to help your son.

However, you also want to do this sensitively and in a way that does not cause him to become self-conscious about his body nor to become unhealthily focused on dieting. So it does require a sensitive response from you as his parents.

Before knowing how to respond, the first thing to do is check out how much your son might be overweight. The Body Mass Index (BMI) is the most commonly used measure of whether someone is underweight, normal, overweight or obese. There are many online BMI calculators on reputable health sites for parents such as nhs.ukwhich also provide a range of helpful information on parents creating healthy eating habits for children.

In addition, it is a good idea to take your son to his GP or to a dietitian to confirm his BMI and to advise you further. Your GP should be able to do a general health check-up to rule out any medical or physical causes to him being overweight.

Many parents are surprised to hear that their children are overweight especially when their children seem to eat a reasonably healthy and balanced diet while also being relatively active (as seems to be the case with your son). However, in these situations it is frequently the quantity not the quality of the foods that the child is eating. It is easy to become overweight, while eating only healthy and nutritious foods.

To understand this, you need to keep a close track on the calorie and fat intake of what your son eats and in particular to monitor the portion size. People are often unaware of the amount of food that they need and the recommended calorie intake for children and adults is often a good deal less than the amount of food they expect to be eating.

Though you have made a great start in tackling his intake with the lists of the food in the question, full analysis is harder than it seems and you may need the help of a professional dietitian to complete this.

In helping your son manage, the key is not to focus on dieting or over-restricting his diet – you don’t want to make him feel bad about his weight and you want to keep the focus on healthy and positive eating.

Generally, with children the advice is not to aim for weight loss but rather to maintain their weight and to “grow into” the weight they are.

A professional dietitian will be able to advise you on selecting appropriate foods for your son and what changes to make to the mealtime routine.

However, simple things can make a difference such as always starting meals with smaller portions and allowing him to ask for more if he is hungry (eg in the morning maybe start with the Weetabix, before offering cornflakes or indeed starting the breakfast with a piece of fruit).

In addition, it is important to not insist he “finish his plate” no matter how healthy the food is and to ensure meals are taken slower and consciously such as at the dinner table rather than on the go. Other changes could be restricting treats such as chocolate to the weekend only or to have a special family night when treats can be bought.

In addition to considering your son’s diet, you also need to review his weekly level of physical activity. Though he appears to be doing a lot of sport, it depends on the frequency, the level of intensity of the sport and whether he is fully participating as to whether it will lead to fitness for him.

Many children participate in a sport in a pedestrian manner and this is of little fitness benefit.

In making changes to your son’s diet and lifestyle, it is often best to approach it as a family project. Involve yourself, your partner and your other children in a new healthy family lifestyle.

Review everyone’s eating habits and activity levels and make family goals that everyone participates in. Such a family-based approach doesn’t single your son out, benefits everyone and has a much better chance of succeeding.

There are some good resources online such as www.getirelandactive.ie and www.safefood.eu and for professional dietitians and nutritionists see www.indi.ie.