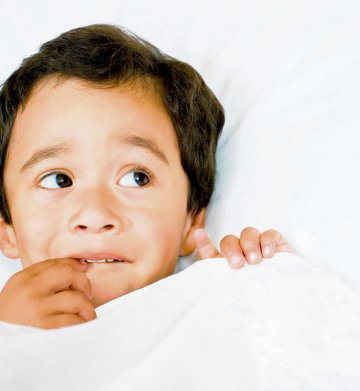 Q. Our six-year-old son is a happy, outgoing, enthusiastic little boy. A few months ago he started having nightmares most nights, and wakes up hysterical on occasion. He is now getting upset at bedtime saying that he doesn’t want to go to sleep because he is afraid of having one. He has no computer games, watches age-appropriate TV and, likewise, his books are age appropriate, so he is not exposed to violent or frightening programmes or stories. Initially, we thought they were stemming from a new cartoon he had started watching so we stopped him watching it. That made no difference. I have tried repeatedly reassuring him that dreams aren’t real, that we are just in the room next door, that his teddy will protect him, and at bedtime we talk about all the happy and fun things that happened that day. I am careful not to make a big deal out of it, and discuss the subject only when he brings it up. None of these strategies have worked, and I am at a loss to know what else I can do to help him.

A. From the age of two or three young children can have nightmares and they are a common childhood experience. They tend to be most frequent for the five to eight year old group because at this age children are more aware of and sensitive to life dangers and adult concerns. Their nightmares are ways of processing and re-enacting these everyday stresses and worries.

For most children nightmares are only occasional and result in no daytime problems but for some, like your son, they become frequent and can lead to the child being fearful of going to sleep. There can be many different triggers for nightmares such as listening to a scary story or listening to news of tragedy or problems on the TV. Remember that something mild or ordinary can be scary to a small child – even age-appropriate TV can frighten a small child depending on how they interpret it.

Nightmares can also be triggered by everyday stresses and losses whether these are social challenges (falling out with a friend in school) or new events (going to a childminder) or family stresses (a parent losing a job, etc). Sometimes it is very hard to identify a specific trigger and the nightmares are just related to everyday stress.

As seems to be the case with your son, nightmares can become habitual. The more frequently you have a specific nightmare, the more likely you are to have it again. Unfortunately, for some children they can get into a habit of having particular distressing dreams which is difficult for them and their parents. The good news is that there are a number of things you can do to help your son manage his nightmares.

Understand and prevent nightmare triggers
As you are doing already, try to discern if there are specific triggers for your son’s nightmares that you can protect him from. For example, this might include not letting him listen to the news or being there to talk through his worries if he hears bad news. To determine what the triggers might be, there may be a clue in the content of the dreams he is having. Is he having a range of different nightmares or is there a specific repetitive one that bothers him? It is important to encourage him to talk about his dreams so you can understand how they might be triggered.

Help your son actively manage his dreams
I know you are concerned in your question not to “make a big deal” out of his nightmares and while this is true, it is also important to set aside a time the next day to talk through the content of the dream with him. It is important to help him describe the dream and to express his feelings about what happened. Doing this in the cold light of day will help him feel better and put the dream into context.

Your role is to be a good listener, to acknowledge his feelings but also to act as a counterbalance to his fears. If he finds it hard to talk, you can help him to draw a picture of his nightmare on a page.

Once you have listened, then you can suggest a number of strategies or “solutions” to his nightmare. For example, you might suggest alternative endings to his dream or ask him to come up with allies to help him.

If he was being chased by a monster in a dream, you could encourage him to turn around and tell the monster to go away or even to stand his ground and say to the monster, “You are only a dream.” You could also suggest he comes up with an ally or special resource to defeat the monster – maybe he has a special shield or sword he can use. Remind him that he has a powerful tool – notably his imagination – that he can use to change any dream. You can reinforce his new ending to the dream by drawing it out on a new picture which he can hang near his bed. You might need to repeat this conversation a few times with him in order to overcome a particularly challenging nightmare.

Establish a relaxing bedtime routine
The more relaxed a bedtime routine he has, the easier it will be for him to manage his nightmares. As well as having a nice routine that includes a story and a chat with Mum or Dad, you might want to also include in this some specific rituals to ward off nightmares so he can have a good night’s sleep.

This can include saying special prayers, building a “dream catcher” with him that you can put on his window to filter out nightmares and/ or giving him a special superhero cape to protect him in the night. To make this work, pick a ritual that activates his imagination and make sure to talk it through and prepare it during the day.