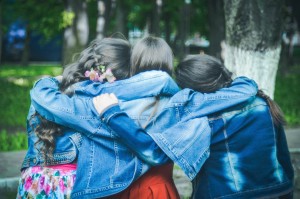 QUESTION:
How do I set my eight-year-old daughter up so she’s not part of a group of girls who are excluding one girl in the class? The context is that the “one girl” has said unkind things to others. Now a group of five or six of the girls are being unkind back to her and excluding her.

I don’t want my daughter to be part of the ganging up, but she is also too young to be responsible for refereeing or sorting it out. We’ve chatted about, it and came up with ideas about what she could do in the situation, but I noticed she was becoming worried that she has to solve it.

ANSWER:
At the age of eight years the challenge of forming friendships and trying to fit in with peers becomes a big issue. This is a time when children are trying to work out what group they belong to and which friends they might play with.

In the school yard, children can divide into different friendship groups (eg mini groups based around a sport or interest or centred on “popular” girls or leaders). The dynamics of inclusion and exclusion can become problems in these situations and some children can easily feel left out.

Unfortunately, this can a breeding ground for bullying and negative group dynamics (eg making negative comments behind someone’s back, etc). It seems to be a particular problem with groups of girls who are more likely to engage in social bullying rather than physical bullying in the case of groups of boys.

These problems start at about the age of eight when group identity becomes important yet the children are still quite immature socially and can lack the necessary relationship skills. These social problems tend to peak at the age of ten before declining as the girls develop better empathy and social skills to manage things.

Being a bystander
Being a bystander to unkind behaviour or bullying can be nearly stressful as experiencing it yourself. You can feel guilty that you don’t help the other child or worried that if you say something and stand up for her, that you will be targeted next and excluded. Some children might join in the unkind behaviour because they want to fit in with the popular group.

In supporting your daughter, it is important to listen and acknowledge her feelings. For example, you can acknowledge how hard it is to see a girl being treated unkindly. You can help her empathise with how the girl being might feel (eg “it must not be nice with no one talking to you”) and even try to understand why the girls might be behaving unkindly (“why do you think people say those things?”).

There is a simple social or moral lesson that you are hoping your daughter might learn such as “even if you are upset that someone has been unkind to you, it is not right to simply be unkind back and really unfair to gang up on them”. Helping your daughter empathise and understand the group dynamics will be helpful to her.

Coaching your daughter in how to respond
While of course you should let her know that it is not her responsibility to “fix” things, you can encourage your daughter to think how she wants to respond.

First, explore with her what she thinks of how the girls are responding and what they could do instead. Help her think how she might personally respond. For example, she might simply not join in the “ganging up” and not participate in name calling.

Later, she could then make an effort to talk to or include the girl later by making sure to play with her.

Alternatively, she might say something assertive when she see’s any unkind behaviour such as “why don’t you tell J if you are upset, rather than talking behind her back” or “lets leave J alone – its not fair to pick on her”. Making assertive statements like this is tricky to get right and it is useful to rehearse them with your daughter showing the correct tone, etc.

Being assertive also takes a bit of courage so don’t “expect” her to do this and give her permission to look at other options. In particular you might look at how she can tell the teacher about what is happening (who is responsible for sorting things out) or agree with her how you will tell the teacher (see below).

Involving the teacher
I think it would be a good idea to inform the teacher about what is going on. Teachers are pivotal in sorting out these social problems in schools and lots of schools have proactive friendship and anti-bullying policies. The teacher may not know yet what is going on and would appreciate being informed as early intervention is key in these social situations before the escalate into much bigger problems.

The teacher can do lots of different things that can help from formally talking to the girls involved, to doing a whole class module on “the importance of friendships and including everyone” to subtly redirecting the girls involved and/or supporting the child in question to make friendships with other girls.

In raising the issue with the teacher, be matter of fact and use non-dramatic language. Explain how your daughter has been stressed about witnessing some unkind behaviour between girls in the classroom and that the girls might need some help sorting things out.