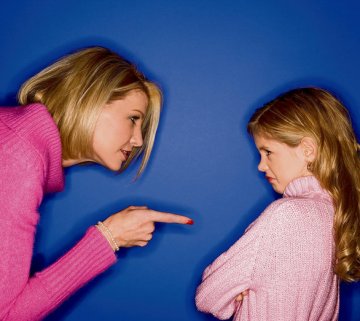 Q. I have recently separated from my husband after 10 years of marriage. We have an eight-year-old daughter who lives with me but sees her father every other day for an hour or so and she stays over one night a week with him. In the past couple of weeks, she has been really acting up and won’t do anything I tell her. I seem to be shouting at her all the time and it’s really upsetting.

I feel like a bad mother that I can’t even control my own child. She seems to behave for everyone else and her father does not seem to be having the same problems. To be honest, he and her grandparents spoil her (he is living with his parents) and do all the nice stuff and I’m the one left carrying the can. I have to get her to school, do homework, etc. I don’t know if her misbehaviour is to do with the separation – she was upset for the first week when her father left but then settled once she realised things had not changed too much for her and she would still be seeing everyone. Any advice on how to manage would be gratefully received.

A. Children frequently act up and display more misbehaviour when their parents separate and there can be different reasons for this. Sometimes, it is due to the child’s distress at their parents’ separation and represents their means of expressing their feelings. It can also be due to the parents’ distress post separation, as they might be dealing with their own upset at the break-up or be experiencing more pressure having to parent alone and so on.

At the heart of these problems is often the child’s divided sense of loyalty when they can feel they have “chosen” one parent over the other. Children can wonder who is to blame for the separation, sometimes blaming one parent more than the other – and in some situations blaming themselves. Frequently, as in your circumstances, it is the parent who does the day-to-day caring who gets the brunt of the anger, as the child can be on his/her best behaviour for the parent they see less (and who has less responsibilities for homework, routines, etc).

There is, however, a lot you can do to improve the situation. Firstly, it is important to work constructively as co-parents with your ex-husband. If possible, it is a good idea to discuss the problems with your daughter and to seek his support in solving them. For example, it would help if he explained to his daughter that even if she is upset she should still behave respectfully to you as her mother. Increasing her father’s involvement or making sure he takes on more of the parenting responsibilities (such as homework, etc) as well as the fun side of parenting would also help you feel more supported.

The more you work constructively together as parents, the more your daughter will not feel caught in the middle and the more likely she is to behave. Ideally, it would help if the two of you could sit down together to explain the situation to her, to listen to her feelings and questions, as well as stating how you expect her to behave respectfully towards both of you.

It can be helpful to raise the issues directly with her – “Sometimes children can find themselves caught in the middle when their parents separate – do you feel like this?” The key is to be available to listen to her and not to be defensive if she raises some difficult issues. Even if she does not immediately open up about her feelings, letting her know that you are open to hear her when she is ready to talk is important.

As well as being supportive to your daughter, it is also important to be a parent and to insist that she should keep rules and to treat you with respect as her mother. When faced by opposition and misbehaviour, it is easy to get caught into ineffective ways of responding, whether this is nagging, criticising or shouting. However, these strategies can make matters worse and easily become vicious cycles.

The key is to learn to interrupt negative rows and to instead use positive discipline such as calmly setting clear rules and then following through by using consequences and choices rather than anger or criticism. For example, if she is not doing something she is meant to, rather than shouting, think of a good consequence you can use – “You have five minutes to get ready and if not you will lose some of your TV time tonight.”

Positive discipline takes time and patience and there is more information in the books mentioned below. Though things might be stressful between you, it is important to keep the channels of communication open and make sure to include fun and relaxed times in the daily and weekly routine. Creating space in this way makes it easier to manage the conflicts.

Finally, it is important to take steps to manage your own stress and to ensure you are coping personally. Post separation is a difficult time for parents and children alike. Make a plan to prioritise your own self-care, whether this is getting support from family and friends or more formally by seeking counselling or connecting with relevant support organisations such as One Family (www.onefamily.ie) or the Family Support Agency (www.fsa.ie). There is more information on parenting post separation in my book, ‘Parenting When Separated’, and on positive discipline principles in ‘Positive Parenting’.