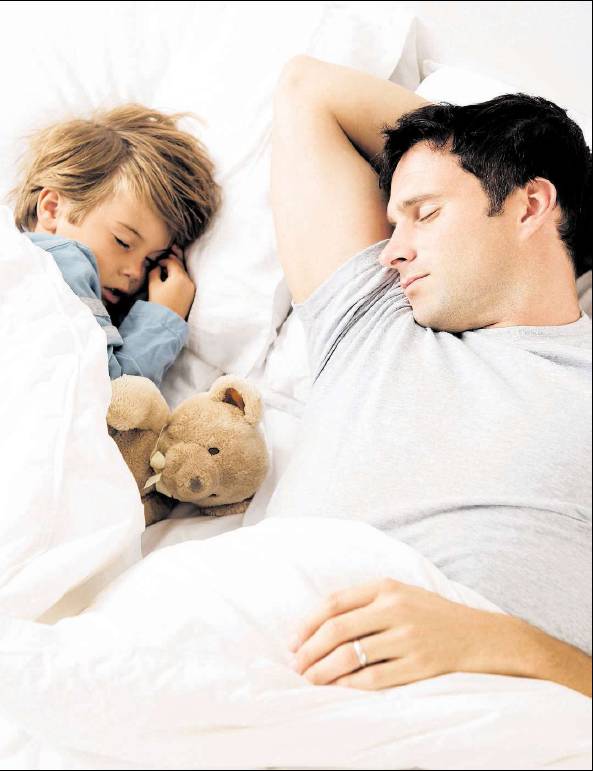 Q. We have a three year old who is now sleeping in his own bed but wakes up every night and looks to go to bed with us. We are persistent and bring him to his own bed, but one of us has to sleep next to him until he drifts off – most times we end up sleeping in his bed. How can we resolve this? Because he is not in a cot and sleeps in his own bed he can easily jump out and run into our room. Putting a gate to his bed room door could be an option, but will this go down well? Any advice about this would be helpful?

A. Once children are mobile and able to climb out of the bed, a common sleep problem is for them to leave their room and seek you out when they wake at night. This can happen during the middle of the night when they wake or also just after they are put to bed and before they get to sleep.

Many parents can get caught into a pattern of constantly taking their child back to his bed, only for him to come back straight out a few minutes later, and this can lead to a bedtime battle. Some parents end up sleeping alongside their child (as you are doing) as a way of settling them, but this may be disruptive to your own sleep and may not be something you want to do in the long term.

Before deciding how to respond, it is worth taking a moment to think about how much of a problem it is for you as parents. For example, a significant number of parents allow their preschool child into their bed at night, accepting that he will grow out of this habit in his own time; for others this is too disruptive and they work hard at getting a routine established whereby the child learns to self-settle and stay in his room.

If you decide to change the habit, the good news is that there is a lot you can do to help your child learn to settle by himself. Unlike most one or two year olds, at three years of age children can understand routines when they are explained, and can begin to make choices about how they behave. You could opt to put a child gate on his door, though this could mean that he gets out of the bed and calls you from the gate instead, and may not teach him in the long term about self-settling.

Generally, I would recommend adopting a gradual process of teaching him to stay in his bed at night. If you currently lie with him to help him settle, start with this and then gradually withdraw. For example, when he seeks you at night, take him back to bed and comfort him for a few minutes. Once he is settled, then you withdraw saying, “I will be back in one minute, but only if you are lying quietly in your bed.” Then you return to tuck him in, ideally before he has got out of the bed again, so he learns that he gets your attention by co-operating and trying to sleep.

If he cries or comes out before the minute is up, say calmly, “When you are quietly lying on the bed, then Dad/ Mum will come in.” Initially you may have to accept low levels of co-operation such as walking back to the bed, or lying down for a few seconds, but you can expand the amount of time you leave him lying quietly before you go in, so that eventually he falls asleep himself.

In addition, over time you can gradually reduce the amount of support you give him to settle, for example, instead of lying with him, maybe you can just tuck him in or, even better, you can give him a favourite toy to cuddle or encourage other soothing behaviours he can do himself.

This gradual withdrawal method is difficult to try in the middle of night when you are tired and it is recommended to first try it during the bedtime routine when you have more time and energy to see it through. Once you get your child used to settling himself at bedtime, it becomes much easier to deal with night-time waking.

A particular challenge with night-time waking is that preschoolers can’t tell the time and don’t know when it is morning (especially in the summer), so they come into their parents in the night to check if it is time to get up. To address this it can help to have blackout curtains and also there are special clocks (such as a Gro-clock which shows a moon at night-time and a sun at morning wake-up time) that are easier for preschoolers to read, so the child knows when they can go into their parents.

You can also prepare your son for the new bedtime and night routine using a picture chart, whereby the steps of the routine are described in a simple set of clear pictures that your child can easily understand. You can draw the pictures (and get your son to colour them in) or take them from magazines or even take photos of your child at the various steps to make it very clear what is expected.

The routine can include bedtime steps such as washing teeth, putting on pyjamas, reading a nice story and your son cuddling down to sleep. Then night-time steps such as a picture showing your son waking at night, but staying in his bed and cuddling his teddy to get back to sleep.

The chart should finish with a nice rewarding step such as your son waking in the morning refreshed and gaining a star for staying in his bed all night. You can also include a natural reward like having special cuddle time in the morning, whereby your son is allowed into your bed for a 10-minute cuddle before getting up. The key to making the chart work is getting your son motivated and involved, and to ensure he receives plenty of praise for learning to stay in his room at night.