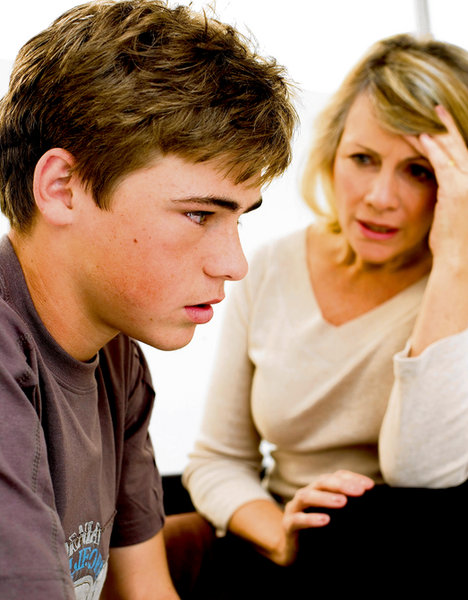 Q. I separated from my husband just under two years ago, mainly due to his drinking and gambling. It has been a hard couple of years though things are a lot better now. My ex has got his act together. He lives with his mother, has stopped drinking and gambling and sees the children regularly.

The problem is my oldest son who turned 13 last month. He has become really cheeky and disrespectful to me at home. He has been really critical of me and everything I do. In particular, he doesn’t like me going out to socialise and meet friends and makes negative comments that I am “too old” to go out, etc. It’s weird but it reminds me of the way that his Dad used to try to control me during the bad times. I thought a lot of the problems were his age and teen hormones but then we had a big row last weekend when he blurted out that he didn’t know why I “threw Dad out of the house”.

I saw red and blew my top at him. I was furious to be blamed for what was really all his Dad’s fault. Now I feel guilty for shouting at him and I am also really annoyed at his Dad who seems to be having conversations with my son which somehow make him out to be the innocent party. What should I do?

A. Parenting an adolescent can have its ups and downs at the best of times and in the context of parental separation it can bring special challenges. During the adolescent years children can re-experience some of the hurt and confusion they might have originally felt about their parents’ separation.

As they can now think in more complicated ways, new questions can emerge for them as to why their parents separated and they can feel a “divided sense of loyalty” more acutely than before.

Frequently, to make sense of what happens they can feel they have to take a side or to judge one of their parents at fault for the separation.

As they are dealing with their own emerging sexuality, adolescents can be uncomfortable with their parents starting new relationships at this point in their lives. This could be the source of his criticism of your socialising.

While of course you can appreciate your son’s upset and confusion at his age, it is not okay for him to be disrespectful or aggressive towards you as his mother. While you can understand some of his discomfort about you dating, it is not acceptable for him to try to control your life or to feel he can negatively comment about your social life.

To help him, the key is to encourage him to express his feelings, worries and upset but in a way that is respectful to both you and his father. At 13 he probably does need more information about the separation, and teenagers appreciate being spoken to in more of an adult way about the circumstances of the separation as they are more able to understand.

Use the fact that you had a row as an opportunity to approach him at a better time to raise the subject of the separation. Pick a good time when he is calm and open and check in with how he is feeling – “Look I am sorry we had a row the other day, but you raised some important worries about how your Dad and I separated.”

Try to listen without judgment to what he says and encourage him to share his feelings. When you do explain the circumstances of the separation to him, try to do this in a way that is factual and does not blame either you or his father or that at least is compassionate to both of you.

If possible, the ideal is for this information to come from both you and his father. You don’t say in your email as to how communication is between you and his father at the moment, but it is important to tell his father about what happened and to seek his support in resolving things.

As well as your son having individual conversations with you and his father about the separation, it might be useful if the three of you could sit down and go over things together at least initially. That way your son will see you as working together as parents and he will feel less pressure to “judge” or to take a side.

Finally, remember that your son is starting his teen years which can be a bumpy ride for teens and parents alike. Though he might be pulling away, think of how you can stay connected with him. Prioritise and build on the times when you do get on well with him whether this is chats before bed, going for a walk or even watching a favourite TV programme together.

For more information please see my book Parenting When Separated.