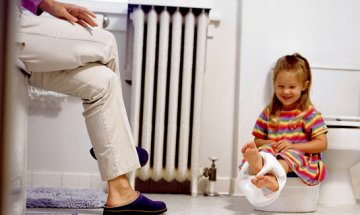 Q. I am writing for advice in relation to my three-year-old daughter who is the youngest of three girls as we have been having enormous difficulty in toilet training her. We first attempted to train her when she was two and a half and was showing signs of being ready, but had to stop after several weeks as there was no success. We started again six months later when she turned three and she has mastered staying dry relatively easily and now goes to the toilet by herself to do her wees. However, she has never managed to do a poo in the toilet, and every day – and sometimes several times a day – she will poo in her pants. This has been going on now for almost three months and, while it doesn’t seem to bother her at all, it is messy and frustrating for us.

We’ve had lots of chats with her about being a big girl now and using the toilet and have put plenty of books for her to read in the bathroom. We’ve tried star charts and rewards, and even not rewarding her when her sisters get a treat, but none of this is having any effect at all. We’ve even said that we may have to put nappies back on her and she wasn’t happy about this. I have noticed her crouching down on occasions and have tried taking her immediately to the toilet, but she always says she doesn’t need to go, will get quite distressed if we ask her to stay on the toilet, and then less than five minutes later she will have a poo in her pants. She will rarely tell us when she has done a poo in her pants and generally doesn’t appear to notice. She is not a particularly strong-willed child, is easy to get on with and overall is very content. Her diet is fine and she doesn’t suffer from constipation. I would really appreciate some advice as to how we can tackle this as I don’t want to be too hard on my daughter or to give her a complex about this.

A. Problems related to soiling, constipation and setbacks in toilet training are among the most common childhood problems presented to GPs and health professionals. Frequently, toilet training does not run smoothly and can be a long-term process with fits and starts.

You are right not to over-pressurise your daughter to use the toilet when she resists as this is usually counterproductive. If going to the toilet becomes stressful or a battle of wills, this could result in her holding on and stopping her natural urge to go (as you have experienced when you take her to the toilet when you spot her mid-flow). If she got into a pattern of holding, this could lead to her becoming constipated, for her bowel movements to become uncomfortable and then for her to further avoid going to the toilet.

In helping your daughter, the first thing to do is to try to understand what is stopping her from using the toilet. From what you say, this does not seem to be due to a lack of knowledge about the toilet as she regularly uses it for her wees. She is unlikely to be constipated, as you say, if she is having regular bowel movements that aren’t too hard and which she seems to be in control of. However, to rule out any physical problems such as this, you may wish to take her to your GP or public health nurse.

Her behaviour of soiling could simply be a habit that she is not fully aware of. Many children develop a particular ritual when making a bowel movement that helps them feel comfortable. Ideally, this ritual is based on sitting on the toilet, which they associate with relaxing, letting go and doing a poo. It could be that your daughter has her own ritual which unfortunately involves her crouching at some place in the house and soiling.

To help her move from this, the first step is to closely observe her behaviour and the signals she gives that she is ready to poo and how she makes herself comfortable. Then you want to encourage her to come and tell you when she soils, so you can help her put words on what is happening. The key is to first respond without pressure or criticism. For example, when she tells you, you can say, “You did a poo, good girl for telling mummy” of if you spot her crouching, “I see you are doing a poo. Good girl, let’s get that poo out. Well done.” Once she becomes aware of what is happening and is able to tell you, then you can restart toilet training and encourage her to move her ritual into the bathroom.

Rewards can be helpful in encouraging her to use the toilet, but the challenge is timing (doing this when you are both ready), focusing on the positive behaviour she understands (keeping her pants clean/ or getting a poo in the toilet) and picking the right reward that motivates her. It is often a case of starting very small so she gets interested in the reward. For example, you could give her a star for doing a wee in the toilet and a special super star when she does a poo, or you could even start by giving her a star for coming and telling you when she does a poo in her pants if that represents progress.

If she does not want to wear nappies, you could galvanise this motivation by putting her back in training pants in the house temporarily with the goal of returning to “grown-up” pants when she has learned to keep them clean. To make it easier for you and her, there are special training pants that resemble ordinary pants, but which are leak proof yet also become damp to give the child feedback when they have used them.

In long term, patience is the important virtue when dealing with toilet training as is making sure to maintain a positive teaching approach. Remember at three years of age, she is still relatively young and lots of children are not fully toilet trained at this stage. If the problem persists or you want more support, do seek help from your public health nurse or your local primary care team.