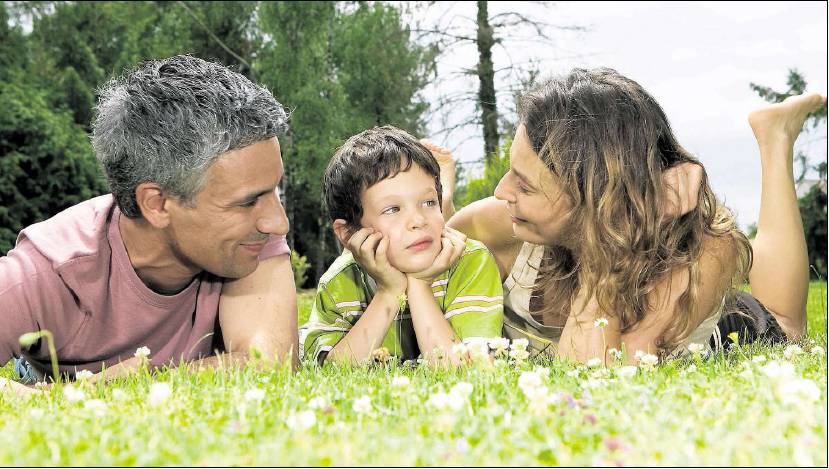 Q. My three-year-old son has grown up with German and English as his first languages. As his mother, I have been speaking German to him since he was born, and my Irish husband has spoken to him in English. So far, he has managed really well. His speech has been very clear in both languages from about two-and-a-half years of age. We live in Ireland and clearly he is surrounded by an English-speaking world.

However, when we go to Germany, after a few days he always manages to tune into German without problem. As it happened, my husband was away for a week in January and my son was clearly upset by his absence. His speaking pattern changed and he doesn’t speak German to me anymore. He keeps telling me that he is not able to speak German.

I am feeling a bit lost as I don’t know if this could be connected with his dad’s absence or if he just realised that it is much easier just to speak English to me. He knows that I understand it because my husband and I converse in English at home. I do keep speaking German to him, and I don’t really want to make it a big issue of it as I don’t want him to turn away from his mother-tongue. I would appreciate any advice you might have.

A. Bringing children up in a bilingual home provides many benefits and learning opportunities, and can be a real gift to them. Not only do they learn the two languages they are exposed to, but they also assimilate an understanding of grammar and how sentences are made across different languages.

Further, early exposure to two languages is advantageous to toddlers and preschoolers when there is a critical period of language acquisition, making it easier for them to learn new languages at a later age within the formal setting of schools and college.

In addition, children benefit from speaking the languages of both their parents, which helps them to feel connected to their origins and allows them to appreciate different cultures.

For most children, the learning of two languages is surprisingly effortless and fun, though some might be slower to build their words and thus a little delayed in their speech, especially in the language spoken outside the home. However, unless a child has specific language problems, this delay is short-lived and most children catch up quickly enough by the time they start school.

You have also gone the right way about it. Because you consistently speak German and your husband consistently speaks English, it is easy for your son to “code switch” and to distinguish between the two languages. He is in a good position to keep his German if you, as the mother, are the main carer and this is the main language he hears at home, especially as he will be exposed constantly to English in the outside world.

The reverse situation is harder, when the parent who spends less time caring for the child speaks a language different from the main culture. In such cases, the parent has to make more of an effort to ensure the child gets the language exposure they need.

Though bilingualism can run smoothly, there can be setbacks – as you have discovered. Sometimes children choose to resist speaking their home language. This often happens when they become exposed to their peers and are making a choice to fit in, usually when they start school. In your situation, it could be simply a fad or a stage your son is going through. Since he knows you can understand English he is just trying it out more.

In response to the situation, I think you are right to continue speaking German to him and not to make a big deal about the fact that he responds in English. Over time, he is likely to return to responding in German in the normal way and he is still learning German by listening to you.

You also might address any insecurities he may have about his father being away by preparing him well for future trips, keeping the time apart as short as possible while he is young and allowing him to connect with this father while he is away by chatting on the phone, for example. Doing up a story book with pictures about the trip that explains when his father will be away, when he will be back and when they can chat can all help.

As children grow older, the home language is always more vulnerable than the dominant outside one and sometimes you might have to make an extra effort to preserve your son’s interest in German. One way to do this is by making sure that speaking German is useful and fun to him. For example, if you regularly meet up with other German parents and children, this gives him a German-speaking peer group and friends he will be motivated to talk to.

In addition, you can make sure that you have lots of fun activities in German at home, such as children’s books, games and puzzles.

Finally, the more your husband supports his son’s learning of German the better. For example, it would help if your husband made a point of learning German himself and joined in the German conversations at home, thus making it a language you all speak together.