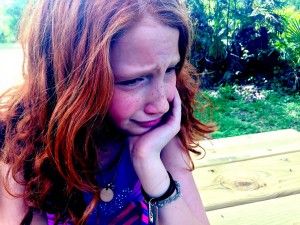 QUESTION:
My nine-year-old daughter has always had a fear of vomit. She was triggered recently by a girl vomiting in her class. The next morning she wanted me to bring her brother to school first. She felt sick and was terrified she was going to vomit. She had what looked similar to a panic attack. She was physically shaking. Nothing could distract her.

Most nights before bed she feels sick, looks at the mirror and sticks her tongue out and asks, “Is my tongue white? Am I pale?” She sometimes feels sick during the day. Recently, I got a call from the principal to say she was sick and was very pale. I explained to the principal that she sometimes worries that she is going to vomit. I got on the phone to her and asked, “Is this the worry bug back again?” I explained that I had a meeting but will have my phone on, and if she still feels sick to return to the principal’s office. She returned to the class and was fine.

Sometimes she wakes up in the night panicking that she is going to get sick. This is the most difficult time to distract her. A last resort is letting her play a game on the phone! Sometimes I feel we are making progress and then then it comes back with a vengeance. The last few weeks have been exhausting.

ANSWER:
Fear of vomiting, technically called emetophobia, is a more common phobia than people think. Most people can relate to the experience that when you witness someone vomiting, it can stimulate the sensation of feeling sick yourself, and you become fearful that you might vomit.

When someone has emetophobia, this fear can become exaggerated and debilitating to the extent that the person avoids situations where they might witness someone being sick (eg avoiding going to school in your daughter’s situation). In addition, the person can become hyper- vigilant about any sickness symptoms they might experience in case this leads to them vomiting. This might explain your daughter, constantly checking as to whether she is pale or whether her tongue looks normal.

When helping a child or adult with a specific phobia such as emetophobia, it is important to realise that they are really experiencing a high degree of fear and anxiety, no matter how unreasonable this might seem. The phobia is experienced as an overwhelming emotion that they are not in control of and which cannot be simply willed away.

As you have discovered with your daughter, it can be experienced a bit like a panic attack. A standard panic attack is a vicious cycle that starts with an anxious child noticing their heavy breathing and their heart racing, which then makes them think they is something seriously physically wrong. This then increases their anxiety as well as as their physical symptoms, which eventually peak in a a panic attack.

With a fear of vomiting, the child might witness a person vomiting (or simply think of someone vomiting). This causes the child to experience sensations in their stomach or throat, which they interpret that they they might be about to vomit. This can escalate their anxiety and these sensations which causes them to panic.

Be understanding and supportive
People who have specific phobias often think they are bit crazy or stupid for having these fears, and this self-criticism makes the fears worse rather than better. The most important message you can give your daughter is one of normalisation. Explain to her that lots of people have these fears and that they are hard to beat once they get a grip.

Reassure her that she is not “mad” or “stupid” in any way. It can be helpful to explain the mechanism of the fear and how it built into a panic (as described above) and if you search online there are many good child-centred diagrams that can explain how this happens.

Listen to her specific experience and encourage her to share the specific fearful thoughts she has – the more you can get her to open up and the more you can listen in a nonjudgmental, empathic way, the more relieved she will feel.

This was a great result, and you should acknowledge and praise your daughter for being brave (as well as patting yourself on the back for being supportive and empowering). You can also teach her strategies for managing her anxiety such as relaxation or mindfulness.

In addition, it is perfectly okay to use distraction (such as playing on a phone) as a means of managing her anxiety. At the end, it is really a case of finding what works for her.

Exposure therapy and emetophobia
Like most phobias, the recommended treatment for overcoming a fear of vomiting is cognitive behavioural therapy (CBT) and exposure in particular.

In exposure, your daughter is taught to face her fear in small gradual steps and to learn to reduce her anxiety at each step. The goal is not to help her to actually tolerate vomiting, but instead to deal with the early steps such as being able to talk/ think about vomiting without becoming panicky.

CBT will set individual goals for your daughter that make sense to her, such as staying in school when she has a “thought about vomiting” or learning to relax when she hears of another child being sick.

Parents can help their children work through specific CBT techniques and there are many good self-help guides online. Alternatively, you may prefer to get the support of a CBT therapist. You may be able to access a therapist via your local child and adolescent mental health service (referral usually via your GP) and there are many different private directories, among them psihq.ie, cbti.ie, iacp.ie, counsellingdirectory.ie and mymind.org/cbt.

Getting on with life
After successful treatment, your daughter may still have some fear of the unpleasant sensation of vomiting but the goal is for the fear to be no longer dominant and to no longer stop her going to school or parties or other social events.

Dealing with this problem, can of course be stressful for parents, so do get support for yourself. If you can, share the challenge of helping your daughter with her father, or a partner or another family member.