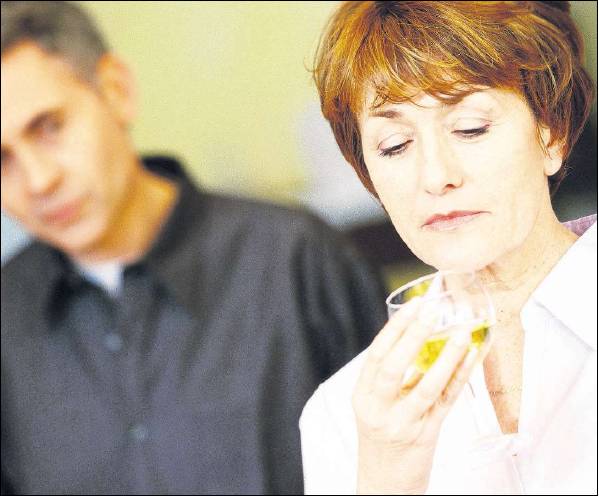 Q. You recently wrote about a mother dealing with her ex’s drinking and I wondered how many men are in a similar position. I know I am. Mum drinks at home four or five nights a week, either on her own or with friends. The kids, who are teenagers, are watching this all the time. I protest about it and am told to mind my own business and threatened with separation and/or being thrown out of the house.

The kids are now losing patience with it and get very cheeky with their mother when she has had a few drinks. She then blames me for letting them away with it and says that I have no authority over them. I can’t take her side in an argument with one of the kids when she is like that, and I know she is wrong.

I haven’t brought up the subject with the kids because I was afraid of giving them a “good parent, bad parent” idea and of them losing respect for their mother. But since reading your advice on the father’s drinking, I am less sure what to do.

She is a great mum when she is not drinking, but when she drinks she is a demon with me and now also with the kids, although never nasty with her drinking buddies. They all think she is great. I have no idea really where I would stand if she was to leave and take the kids with her, or if she did throw me out of the house.

If I do get through this until the kids are adults, my fear is that they will move away and rarely ever come back. I am a good father and am devoted to my kids – and my kids know this. But I am in a no-win situation and cannot see a happy ending to this or to my later years in life.

A. Unfortunately, what you describe is the typical experience of many people living with a family member with alcohol problems. Some say it is a bit like living with two people. As you say, your wife can be a great mum when she is sober and a “demon” when she is drinking.

Further, these problems are often invisible to outsiders. People with alcohol problems often present as very social and great fun when they are drinking (eg when your wife is with her “drinking buddies”), while it is family members who bear the burden – in terms of verbal abuse, aggression or simply neglect – as the person is not available as a parent or a spouse.

There is a often a greater stigma associated with women, and particularly mothers, over drinking which leads to much of the drinking occurring in private and many of the problems being hidden.

You have also highlighted some of the issues for men living with an alcoholic partner. You can feel more vulnerable in your relationship with your children – especially if your partner threatens to leave and take the children – which can make you feel like toeing the line and not confronting the problems.

The first step to solving the problem is to seek support yourself. You should consider contacting professional and voluntary services for guidance. These include the national drink/drugs advisory helpline (1800-459459), drugs.ie, Al-Anon – which is a self-help group for relatives affected by a family member’s drinking (www.al-anon-ireland.org) – and the Rutland Centre, (www.rutlandcentre.ie).

Making contact with services should help you to realise that you are not alone in your situation, and give you space to explore the best options on how to help yourself, your children and your wife.

You may also wish to contact a solicitor or a citizens’ information centre (citizensinformation.ie) to reassure yourself about your legal protections and options. I suspect you would be in a stronger position than you think to safeguard your role as a parent with your children whatever happens in the future.

As you have experienced, it is difficult to discuss drinking problems with an alcoholic in denial. Many will fervently deny that they have a problem, and attack and threaten the person who confronts them.

This is related to the fear at the bottom of an addiction – the addict fears facing up to their dependency and the impact it is having on themselves and their family because they don’t believe they can live without drinking.

Still, it may be a conversation worth having. It helps if you pick a good time to broach the subject (eg, when she is sober, in more open form and you are alone together), to be direct and matter-of-fact (“I think your drinking is getting out of hand and negatively affecting the children”) , and to point out possible sources of support (“I think you/ we should seek some support to get this sorted”).

Though such a conversation may not be initially successful, frequently it is spouses and family members who persuade a person with drinking problems to seek help. Certainly, one of the main reasons people stop drinking is the realisation of the impact it is having on their children and family.

There may be someone else in the extended family you can confide in (such as a sister or brother) who might know your wife well and support you in having this conversation.

You also ask about whether/ how to talk to your children. In my experience, children are always aware of their parents’ addictions, especially as they become teenagers.

Given that your children are already raising the issue with their mother indirectly by being “cheeky” towards her, it might be time to talk to them about what is going on.

Ideally, this should be done with their mother’s knowledge, but this may not be possible until she acknowledges a problem and seeks support. You are right to try to have this conversation in a way that does not “demonise” their mother.

You can be clear that you don’t like their mother drinking but also acknowledge that it might be hard for her to stop. Simply opening up the subject and giving them space to talk can make a big difference.

They may wish to seek their own support at some point in the future and you should support this.