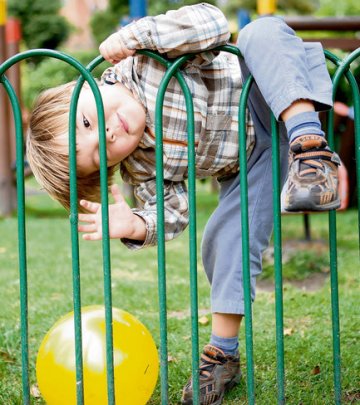 Q. My son, who is 2½ years old, has no sense of danger and can be a nightmare when we are out as a family. He runs away at the slightest chance. When we go anywhere new, the first thing he will do is climb on things and I fear he will fall. If I tell him not to do something, he doesn’t listen and will immediately go and do it. He is very hard to manage on the road, etc. He is very different to his two older sisters (six and four) who were always well behaved and contained. Until he became a toddler we used to be able to go out as a family and even visit restaurants and so on, but now this has all stopped. We even shorten our visits to family and friends because if we take him, he will be into everything and we spend the whole time tracking and managing him. We hoped he would settle as he got closer to three but if anything he is getting worse. I also wondered if he might have ADHD, though I’m not sure about this.

A. Lots of young children have an impulsive active temperament that is hard to manage during the early years.

Such a temperament is more common for boys who can mature more slowly especially in the area of self-regulating activity and impulsiveness. Though your son is two and a half years old, it sounds like he is displaying the impulsive unboundaried behaviour of a younger child. You ask whether this is a sign of attention deficit hyperactivity disorder (ADHD).

The truth is it is very hard to tell at such a young age and depends a lot on how he is progressing in a range of developmental areas such as understanding, speech, hearing and so on. If you are concerned, you should consider seeking an assessment. Your public health nurse might be the first port of call.

However, there is a good chance that he will settle in his own time as he gets older and matures and there are a number of things listed below to help him. By gauging how he responds to these strategies, you will also get a sense of his level of need and whether he might need further assessment or support.

Some couples find it useful to allocate one parent “on duty” when out or in a new situation.

Prepare him in advance for situations
It can help if you explain to him step by step what is going to happen in new situations. To make it easier for him you can back up your explanation by making a picture story of what will happen and what is expected of him.

For example, on a visit to his cousins, you might show pictures:

Provide him with interesting alternatives
Given where he is at, it is too much to expect him to sit for long periods in situations such as a restaurant. If you do plan such trips, bring along some interesting things for him to do at the table, such as books or toys, or consider reducing the amount of time he has to sit, by perhaps one of you taking him for a walk at the beginning until the food is ready, or at the end when the meal is being paid for.

Be very clear when you set a boundary
When you ask him to do something (such as “hold mum’s hand”), make sure you first move close to him, make eye contact and use simple language perhaps backing up what you are saying with gestures such as tapping the seat you want him to sit on, or gently taking his hand to guide him to go somewhere.

The key is to be positive and upbeat in your language, and to avoid being angry or critical.

Use do’s rather than don’ts
Make sure you use only positive instructions. Rather than saying, “Don’t climb on the table”, which actually focuses him on the problem behaviour, it is important to tell him what you want instead, such as “Please sit on your seat”, which focuses him on where you want him to go.

Promote his attention in everyday situations
When out and about, focus him on his surroundings by describing what is going on around him and, in particular, describe the things that capture his attention – “Look at the leaves falling” or “Bump, we went over a bump”. This will improve his attention and language.

“Coach” his attention with listening games at home
Set up fun activities at home that can improve his listening such as a “shop game” where you ask him to bring you an object from a selection (“Bring me an orange”) or “hide and seek”, where you hide an object in his view and ask him to find it (“Where is the dolly now?”).

This will help him slow down and to learn to listen to the information you are giving him.

The good news is that things are likely to get easier as he gets older and his listening and understanding improves. He might also benefit from sessions in a good-quality preschool setting.

In the meantime, it is important to manage his impulsiveness and lack of a sense of danger in as positive a way as possible. As mentioned earlier, seek further assessment if over time you remain concerned about his development.