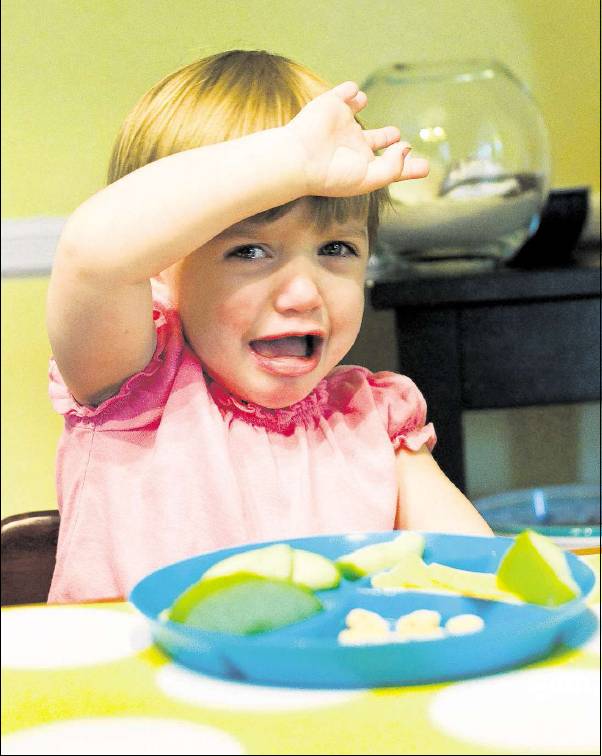 QUESTION
I have an 18-month-old child who refuses to eat any dinners for me. In the beginning I put it down to teething and several ear infections, but after five months of this I am getting very frustrated. I am trying every approach and nothing is working. I have tried to leave the food in front of her and not take any notice of whether she eats it or not. I have tried to disguise the food with Rice Krispies on top; that worked for a small while but she is not having any of it now. I have tried not giving her any alternatives and thought she might give in, but that didn’t work either. She went for three days only eating her breakfast, but got very cranky. She will eat cereals, toast, cheese, beans, rice cakes and dried fruit, but this diet cannot go on forever. Do I keep nagging her to eat her dinners or do I just offer her the dinners and then when she doesn’t eat them give her what she wants?

ANSWER
While there are some toddlers who heartily eat their dinners with their parents, these are largely the exception. Most toddlers tend to have limited diets and some can be very picky eaters. A lot of it is to do with where they are developmentally. From one year of age and onwards children become aware that they have a choice, and are more able to assert their preferences. While as babies they might have been receptive to new foods, for example trying out vegetable purées, during the second year they can start saying no and resisting the food their parents put in front of them, and this can become a focal point for conflict and attention.

In trying to help your daughter, the first step is to take a moment to examine your own parental expectations about food and feeding. Lots of parents have high hopes of having family dinners and unrealistic expectations about their toddlers sitting down and participating. At 18 months, your daughter is only gradually getting used to the ritual of family dinners and eating the same food as their parents. Young children often have more of a grazing style of feeding, which means that they might prefer to eat smaller portions and more frequently through the day. This means that you might expect her to try only small portions of the family dinner, but ensure she has access to a range of healthy snacks (which you can expand gradually in range) through the day, where she is getting the majority of her nutritional needs.

If you survey what she eats in a day and over the week, you might find that although it is narrow in range, it might still be relatively healthy and might cover the major food groups.

You can still continue to introduce her to new food at family dinners, but the key is to be patient, to do this gradually and expect her to try only small portions. Children will often have to be exposed to new food 20-30 times before they get to like it. In addition, some children have specific preferences over the texture and appearance of food as well as the taste.

Continue to experiment with how you present food and see what is most appealing to your daughter. For example, carrots can be eaten raw, diced or cut into batons, puréed and hidden in other foods, or made into soups or even a juice. Find out which she likes most.

Because she is a toddler, the emotional climate of how food is introduced is crucial. While some gentle encouragement is important – for instance, “when you have tried some mash, then you can have some raisins” – any excess pressure on your daughter can easily lead to a battle of wills and make her dig her heels in more. Experiment with different positive approaches to encourage her to eat. Some toddlers respond to direct praise when eating – for example, when she tries a spoon you might say “well done, you had a spoon of porridge” – for others this can draw too much attention to the contentious food item and they might then stop eating. In those situations, it might be best not to talk about food at all when feeding her at the table – it might work best to distract her with a game as you eat together or even chat, sing or read a book together during dinner time – this way you make sitting at the table rewarding without any mention of food.

The goal is to set it up so that she makes the initiative and asks for food. To help her do this, you might sit down at the table, with the food in the centre and an empty plate in front of her. Then you give out the food to the adults and children who ask. If she does not ask or gesture, then you all eat and pay her no attention. She will see you eating and might become curious or hungry. When she asks for food you only give her a very small portion and do not give her any more until she asks again. Importantly, you stop giving her food before she says no and resists. Using this approach, you rely on her asking for food and this helps her learn to take responsibility. Make this easy for her initially by ensuring you have some of her favourite foods in the centre, so she is more likely to make a positive choice.

Finally, your daughter is only 18 months, an age when picky or fussy eating is very common and frequently a phase children grow out of. By being positive and creative as well as practical and realistic you can do a lot to help her learn to expand the range of foods she eats without it being a pressure for both of you. It is also important to remember that the vast majority of children who continue to be fussy eaters throughout their childhood, grow up happy and healthy as adults without any major problems. Most of the worry is largely in vain.